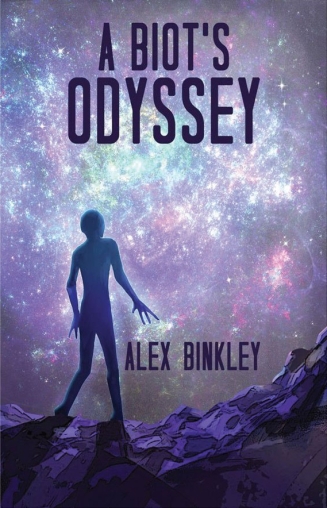 The sequel to Humanity’s Saving Grace.

This account employs Terran expressions and measures of time and distance for readers on Earth and Mandela. Confederation and Pozzen readers should select the Being version. Secund and Dublo versions are in preparation.

Ruth Huxley checked her imager screen for the umpteenth time to ensure she had ready access to the background files for the interview. The clock in the bottom right hand corner showed two minutes before Genghis Khan would arrive.

No, she recalled, the Biot went by just Genghis these days. She would have to ask why he had dropped the second part of the human name he had adopted during the Nameless War nearly thirty years ago.

Genghis was already renowned for his daring when Ruth talked with him on Alliance, the flagship of the fleet of Galaxyships the reptilian species called Beings used to explore the Milky Way. By the end of the War he was both a decorated inspiration to his fellow Biots and a source of pride for the Beings. They had created the biological robots as their helpers more than five centuries earlier to attend to the daily operation of their Confederation, which now numbered nine planets. Humans had coined the contraction Biot. They were identical in appearance and to tell them apart, humans working with them wore special glasses to see their individual identifier signal.

Footsteps in the hall of the one story building that was Ruth’s research center on the planet Mandela indicated his approach. Another glance at her notes reminded her she had highlighted the questions she most wanted to ask.

Biots did not show any signs of aging until their color faded as they approached two hundred years of age. Genghis was in his mid-forties and his fuzzy tan covering skin appeared as robust as ever. “Hello, Madame Huxley. Thank you very much for agreeing to see me.”

He was speaking in English, which would make analyzing him a lot easier. Her Beingish was not up to conversing with him in enough detail to gain the information she sought. He feared he was no longer acting like the billion other identical Biots. To her that was a good sign. It was about time Biots accepted that they were individuals, just like Beings and humans.

“Genghis cut the formality. I would hardly refuse to see an old friend who had come all this way. Last time you called me Ruth.”

“I thought afterward I had been presumptuous.”

She pointed to a chair. Biots did not tire standing and took a seat because it made humans feel more comfortable during a conversation.

Ruth looked at the imager as the small talk continued. Genghis’ narrative appeared on it within seconds of him speaking.

“The last time we talked was five years ago on our way to the 25th anniversary victory celebrations of the Nameless War,” she said. “You told me then that even with your interesting assignments since the War, something troubled you. By the end of the interview, you admitted you were experiencing emotions and desires that weren’t Biot like.

“While you thought that you alone were struggling, later you informed me that your Biot veteran pals were experiencing the same kind of inner turmoil. In fact, their condition was so similar to yours that you wanted to discover how it had happened and what it meant. A year later you concluded that interaction with humans had triggered either the development of emotions in Biots or the realization Biots had repressed them. Beings rarely display emotions and they were your behavioral example.”

Genghis stared at her before replying. “Many of us feared we were morphing into something that’s no longer a Biot. The closest condition I can find to compare it to is Post Traumatic Stress Disorder in humans.

“However, instead of feeling crippled by it, I think it’s empowering us. Combat forced me to make decisions instead of just following instructions. Thinking was followed by the puzzling notion of sentimentality along with restlessness instilled by curiosity. Most surprising is envy of the close personal relationships Beings and humans enjoy with members of their own kind.”

“You mean friends and family?”

“Could we have both?”

She was intrigued that Genghis’s voice rose and fell and he fidgeted and frequently shifted his position. Previously he would have impassively described a great adventure or a mundane task. Most Biots still did.

“That is a most enlightening question.” Ruth did not add that she would share his comments with her god-daughter Ruthie Donohue and Humbawloda, granddaughter of Humbaw, the former Chief Councilor of the Beings. They were heading a multi-disciplinary team analyzing the changes in the Biots.

The biggest puzzle for Ruth was why most Biots still acted like the Beings’ servants. They appeared content in their helper role. They had gained full citizenship in the Being Confederation yet most behaved as if nothing had changed. Well not Genghis and his mates.

“You should revisit the record of the Biots serving on Transformation during the Nameless War and what it took to convince them that they had repeatedly demonstrated the creativity and imagination they so fervently wished for. Perhaps the Biots’ biggest difficulty is they don’t appreciate what they’ve already accomplished.”

Genghis peered intently at the floor as if it might inspire a response. Perhaps he hoped she would provide more information in her answers.

Even if she had told him more, it would have accomplished little. She agreed with the conclusion of the Beings that the Biots had to reach a collective realization they possessed emotions similar to humans or Terrans as they and the Beings called Earth’s inhabitants. Acting on their emotions would enable them to take on a full role in the Confederation.

“Is your discontent motivated by envy of the next-generation Biots? It appears to coincide with their introduction about 10 years ago.”

Genghis stared at her. Perhaps he had not considered this possibility. More than a minute passed before he responded.

“Why would we be envious? Many of the improvements incorporated in them were recommended by original Biots to correct our shortcomings. We were built just 1.2 meters tall to match the height of an average Being. We pushed to have them built 600 centimeters taller than us because we could see the advantage height gives humans. Once that was agreed to, other improvements became possible. Otherwise, we maintained our overall design in the next gens.”

“Yes, they do resemble a generic Being. However it’s the interior improvements that give the next gens big advantages over the originals.”

“Still they were mostly our ideas.” Genghis smiled. “Maybe we’ll have to construct a few next-gens to our size to handle the tight spots.”

Doubting next-gens were not a sore point, Ruth said, “Where will your quest take you next? You have spent time on all the Being and human planets and many years working with the Benjamin Kendo Institute. But first tell me why have you dropped Khan from your name?”

“During my first post-war visit to Terra in 2038, I learned about Genghis Khan’s blood-soaked history. While I had no wish to emulate him in that regard, I did admire his boldness. So I kept Genghis and set out to accomplish great deeds.

“At first my fame was amusing. In time, it became frustrating because it focused on the past rather than the future. What I wanted to understand was why an artificial creature like me could be motivated by more than what we learned during our preparation and the Biots’ basic laws of preventing harm to Beings and humans. Now I’ve broadened my quest into whether emotions could lead to separate personalities among the Biots and ruin our strong collective sense.”

Ruth nodded to encourage him to keep talking. Finally Genghis had accepted that Biots were developing their own personalities. The differences among them were clear to humans and Beings. What would it take for them to realize that? Although they had no gender, many had adopted male and female names and referred to themselves as he or she.

“I was fortunate enough to be accepted by the Kendo Institute to study how the Beings had developed us. I still marvel at what they created. I worked with Benjamin on our collective identity issue.

“We also studied whether the presence of reptiles in Earth’s past and present indicated a link to the Beings even though they predated the earliest humans by more than one million years. You know how much the Dinosauroid developed by Dale Russell fascinates the Beings. I also participated in tracking the Beings’ efforts to mitigate both the causes and damage done to Terra by the environmental damage and climate change that human recklessness had caused.”

The Beings had provided improved solar and wind based energy systems. With the levels of atmospheric pollution reduced, the planet was no longer ravished by as many vicious storms and droughts.

However Earth in 2065 remained in a troubled state both politically and environmentally, which made Ruth glad that she, her son Nathan and her daughter Louise had settled on Mandela along with a billion other humans.

“One evening on Terra, I joined a stargazing party,” Genghis said. “With few artificial light sources and a cloudless sky, the view was spectacular. As my companions pointed out individual stars and constellations, I realized that during all my voyages in space, I’d never taken the time to admire my celestial surroundings.

“Either I’d been a Soldierbiot being transported to an enemy-held planet or a civilian visiting the Confederation and allied worlds. I’d always been preparing for the destination, not contemplating the significance of where I was. That brought me to decide spending time serving on board a Galaxyship would change my perspective. So I have volunteered for space duty. I’m waiting for my first assignment.”